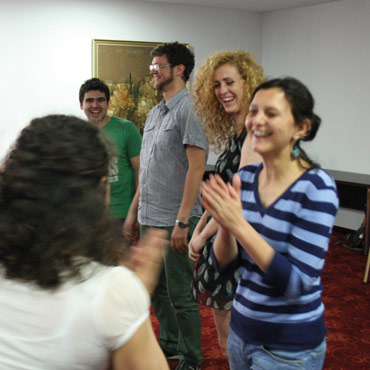 Over 140 enthusiasts from different Bulgarian cities participated in the Social innovation challenge by Ideas Factory across the country and dozens of like-minded teams rushed to solve real problems, including the lack of sewerage system in one of the neighbourhoods in the village of Sinemorets, solutions for the unemployed women over 50 years of age, the need of support for a small start-up business in the Plovdiv district “Stopilinovo” and finding a way for autistic youngsters to create their innovative social enterprise.

The jury selected six of the ideas that were awarded not only with mentoring support, but also with a scholarship to participate in the Changemakers Academy in which lecturers and social innovators from Bulgaria and the world will be at their disposal and will help the young teams to put Bulgaria on the world map of social innovation and social entrepreneurship.

From 5th to 8th of June Plovdiv, also known as the “city under the hills”, was conquered by the Changemakers and the team of the Ideas Factory on their “Mission Change”. For a second year the “fabricants” provided the agents of social change with a series of lectures, seminarsand activities to help them understand what is the effect of the processes behind the major changes.

Systems thinking, negotiation skills, U-theory, World caffe, Ideas Lab, empathic leadership, nightchallenges and a meeting with the municipality to create innovative vision for the social services in Plovdiv were only a small part of the cherries on the cake.
Lecturers at the Plovdiv Academy were Ralph Böhlke, Tsvetana Chakarova (Amsterdam) Filka Sekulova (Barcelona Free University) and Asen Nenov and the event wasopened by Gemma Baruhk – Executive Director of the Plovdiv 2019 Foundation.

The results: A community of happy, confident and connected with each other agents, burning with desire for solving the challenges. After the Academy, 97% of the participants answered the question “From 1 to 100, how would you describe your motivation to continue with your idea or project for social change after the Academy?” with 120…

A very special event during the Plovdiv Academy showed an innovative approach for catalyzing the civic creativity in order to solve urban challenges. The “academicians”,municipal staff, journalists and representatives of creative professions were mixed in a non-hierarchical dialogue aimed to upgrade ideas. The format is called World Caffe and allows for a minimum time as many people as possible to form optimal quality ideas on an given issue.

The Academies in Burgas and Vratsa will stir up the Southeast and Northwest in September (04-07)and October (02-05) respectively.
The Academy has the incredible power to create space for the birth of bold new visions and to give wings to those who have the courage to implement them. The sessions involving social entrepreneurs from around the world, speakers and mentors from home and abroad, the combination of techniques makes the methodology a crucial support for the young and ambitious social innovators.