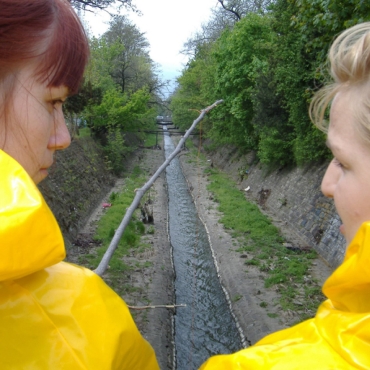 Our idea was to stimulate a thought process in the urban environment about nature conservation and other stories through performances in the public space. It can be called “invisible theater”, theater of improvisation … a strongly Balkan project, which ended with a fest by the Ariana Lake and was the first publicity for “Let’s Save Irakli”The photo is from the action called “fishing”, in which 10 folks in yellow raincoats, with coolers and fishing chairs, sat down to fish at Eagles’ Bridge. Yeah … yeah … in that same channel that some boldly call Perlovska River. Boldly indeed!

OBJECTIVE: To some extent the goal was … to provoke, to shock and to evoke interest, without being afraid of the public space which we used as a stage.