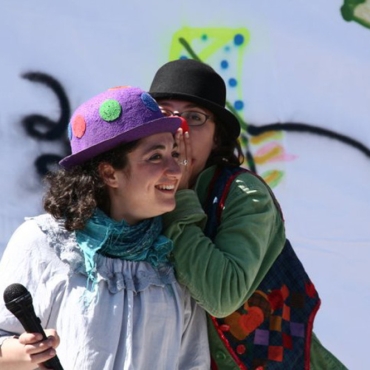 People from the “Association for the Revival of the Village of Mandritsa” come up with great ideas to enliven their favorite native village. Willing to please and attract mostly youngsters – the potential future residents of the village and with the support of Ivaylovgrad Municipality, they had organized an Easter celebration for children. They invited us to create the festival’s program with factory’s charge together with our friends from Cumbo Circus. And this is what we came up with – a gunny sack race, “Mandritsa golf” (knocking down a matchbox with a potato on a thread) egg-and-spoon race, tug of war with a rope made from recycled materials and other games.

One of the major attractions was the “Treasure Hunt” – a real quest-game to explore Mandritsa. Children were walking around the village with different missions, interrogating the grandmothers and learning many things while trying to find the hidden treasure – a pot of gold coins … made from chocolate!

Most fanciful of all was the enchanting performance under the tent of Cumbo Circus. At sunset dozens of DIY kites flew in the sky. And finally there was a real mask carnival in which the participants’ fantasy made the Cumbo-jury’s decision maximally difficult.

The good thing is that the festival had a second edition in 2012 and will probably become a permanent event. We wish them the same excitement in the village all year round!

TEAM: “Association For the Revival of the Village of Mandritsa” in partnership with the municipality of Ivaylovgrad, a team from the Factory and friends, Cumbo Circus

WHERE: the village of Mandritsa